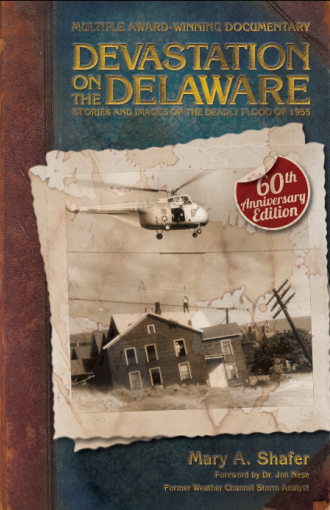 There are any number of reasons you may wish to re-release an existing book title. Maybe you’ve done some market research that shows it would do better with a new title, a new cover, or both. Perhaps you’ve taken advantage of a resurgence in popularity for your subject due to related current events. Or maybe you’ve just done an update on the contents with new material.

This past August, I held a launch event to re-release an existing title that I’ve significantly updated. I thought it might be helpful to share how and why with those of you considering updating one of your own books.

My book, Devastation on the Delaware: Stories and Images of the Deadly Flood of 1955 was originally published in October, 2005. It was supposed to have been published on August 19, 2005, which was the 50th anniversary of the weather disaster it documents. I had signed a contract and already received half my royalty advance from a publisher, but two months before we were to go to press, they went under, taking my project with them.

Long story short, some good friends gifted me the money to repay my advance so I could get back my book rights. By then it was June, and I knew I wouldn’t be able to find another publisher in time to make the project happen in time. I sat back and realized that with my background as an art director and interim editor for a small book publishing house, I had the skill set to do everything but sales and distribution, and I knew I could learn that. So I jumped into the world of self-publishing with both feet.

Remember, this was ten years ago—about three years before tools and platforms became accessible to publish one’s own book affordably and effectively. So I had a huge learning curve and was, at the time, swimming against the current, so to speak: Self-published books were still looked down upon. At the time, I didn’t have the luxury of caring. I wasn’t about to let the three years of my life I’d spent researching and writing go down the tubes.

So even though I was a graphic designer by profession, and had in fact designed covers for more than 50 books in my career, I knew I was too close to this project. I hired a cover designer and only did my own book interior production. I did a lot of research on book printers and found one I could afford (Amazon didn’t yet have CreateSpace and Ingram didn’t yet have LightningSource, so digital printing was out).

With this extra work, I quickly realized I wasn’t going to make my mid-August deadline, but having a late book was better than no book at all, so I simply kept moving forward. As it turns out, I ended up having a more powerful marketing ally than I could ever have imagined. When the book finally arrived in my storage unit at the beginning of October, we were only a month out from Hurricane Katrina nearly wiping out New Orleans’ Ninth Ward, and most of the Gulf Coast. Hurricane-caused flooding was on everyone’s mind, and I made the most of that.

I knew that tying my book in with this new natural disaster was the ticket to getting my press releases published, so I wrote headlines such as, “Book Highlights Eerie Similarities Between Present Hurricane Disasters and Record-Setting Flood of 1955.” It worked like a charm. My email inbox began filling up with press inquiries, and my phone began to ring off the hook. It kept up like that through the end of the year, and that first printing of 2,500 copies sold out in 42 days—even before Thanksgiving!

I updated the book the first time in 2010, and released it on the 55th anniversary of the flood. I had, since the first edition, done a great deal of public speaking on the event and made a lot of contacts. One relationship was particularly helpful and mutually beneficial. I had made the acquaintance of the director of the Nurture Nature Center in Easton, which has an ongoing project, “Focus on Flooding” that concentrates on helping those who live along waterways to be flood aware and prepared to lessen their losses during high water events.

We began talking on a regular basis, and they invited me to speak at the center a number of times. When 2010 rolled around, I pitched what seemed a no-brainer: I asked the director if the Center might be interested in sponsoring the first printing of the second edition. By this time, the industry had changed and I was no longer buying 2,500 copies at a time, which I had to pay to warehouse and insure. I had switched over to digitally printing 200 copies at a time for exhibit and back-of-the-room, post-speaking sales, with the rest of printing and fulfillment left to Amazon and other online distributors.

The Center also saw the sense in our relationship, so in return for putting their logo on the title page and running an Afterword written by the director, they funded the entire first printing of 500 copies. We then split that printing, with them taking half of them and me getting the rest. The half they took were split between sales in their gift shop and copies donated to every top-level decision maker in the Pennsylvania legislature. Can you say, “Thanks for the exposure?” I have actually met state senators who recognize me from my book now!

And so, with this year’s ten-year anniversary coming up, I again offered sponsorship of the new edition to the NNC, and again, we are working together. The printing is slightly smaller—400 copies, and they are taking only 100 of those. They have updated their Afterword contribution, and I will continue running the Center’s logo on the title page.

I’ve once again had the cover re-designed, and have decided that this will be the last revised edition. Ten years is long enough to work on any one project. As a Gemini who’s easily bored, I’m amazed I’m still so interested in this project—and I am— but it’s time to move on. I’m satisfied that with the significant updating I gave the manuscript this time around, it’s as historically accurate and informative as it’s ever going to be.

So, what am I doing to promote this edition? Plenty.

I am having the website, 55Flood.com, completely redesigned to match the visual aesthetic of the new cover. I am also completely overhauling the content. The existing content will remain, but will also be updated with new information I’ve gleaned from the hundreds of people who came out of the woodwork after the original edition was published, and from new sources I discovered since then. “Where to Buy” information will be updated as I add online and offline vendors. The book has won several awards and those will also be updated.

I’m replacing the text-only version of my Upcoming Events calendar with Google Calendar, since so many people use that free online tool. There is a Reader Comments page I just updated, with feedback and reviews. By the way, it’s perfectly okay to link to reviews from Amazon from your book’s site, and I recommend doing so, in addition to those you got on your own. I’ve steadily updated the “I Was There!” page, on which I post the content of emails or letters people have sent who wanted to tell their own stories about their experience in the flood.

I will update the Links page, which lists other places on the Web containing information about the flood and the two hurricanes that caused it. And of course, there’s my online Newsroom, where I post press releases and media coverage of me and my book. That’s constantly updated, both for the user information and to bump my search engine rankings. I will be adding the New Edition Launch press release there, along with high-resolution images of the book cover and new publicity photos of me.

I have already scheduled several speaking engagements, mostly in communities along affected waterways, which are holding their own 60th anniversary observations. My book launch event is being held at—where else?—the Nurture Nature Center, who is supporting me by absorbing the costs of hosting and helping promote the event. Leveraging the relationships I’ve developed with regional media, I am sending them special early press releases in hopes they’ll cover that open-to-the-public event or at least help promote it.

I’ve long had a Facebook page devoted to the book, and I’ve begun posting pre-event teasers there. They consist of book excerpts, 55 flood factoids and blatant promotional messages (though the latter are few). My author Twitter feed is beginning to contain reference to the new edition and by the end of July will be almost nothing but. I make sure to share this info on my personal Facebook page, as well. I will round out my social media efforts by updating my LinkedIn page with the new book info.

I’m in the process of arranging to appear on a couple television shows, lining up some radio interviews (regional public station WDVR is especially supportive of local authors and topics), and scheduling some author appearances at local bookstores. And of course, I’ll be watching during the upcoming peak of Atlantic hurricane season for any opportunities to tie in press releases about my book with current events.

The book has now sold about 6,500 copies with very little presence in bookstores, mostly sold at the back of the room after speaking gigs and in displays at local community fairs. This was planned—I built my publishing company around the concepts in Brian Jud’s book, Beyond the Bookstore, so book shops were never a large part of my sales strategy. Besides, to most people except weather geeks, this is a regional interest title. I knew the sales I’d make would not offset the promotion and distribution costs of putting this book into many bookstores.

With part of my income made as a consultant to indie authors and publishers through IndieNavigator.com, I often advise my clients to think about their books as children: You don’t give birth to a child, feed it a couple time, give it some clothes and then send it out into the world on its own. You nurture it for a lifetime, even after it HAS gone out on its own. Though I’ll no longer be updating the book itself, you can bet I’ll continue to ensure its healthy sales and well-being for as long as I’m still an author. 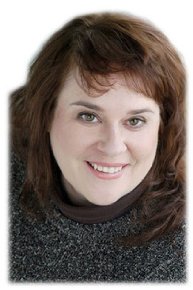 Award-winning author Mary A. Shafer is a full-time freelance writer living in Bucks County, Pennsylvania. She makes her living writing commercial copy, journalistic articles and as a public speaker. She writes mainly historical nonfiction, with her first book published in 1993, selling 15,000 hardcover copies. Since then, she has written two other nonfiction books and contributed to two nonfiction anthologies. Her work has garnered numerous writing and publishing awards. Mary is a member of the American Society of Journalists and Authors, the Authors Guild, Pennwriters, and the Greater Lehigh Valley Writers Group.

You can find Mary at her website, MaryShafer.com, as well as her social media links.