As you probably guessed from the wording on his favorite mug, he are a writer. And GLVWG knows, Jon are also an in-demand conference speaker and will be presenting the following topics at the GLVWG Write Stuff Conference™ on March 23, 2019:

Are Your Characters Right for the Part?

When you create a character for a book or story, it’s tempting to stick with the first ‘person’ who turns up to audition, but what if he/she isn’t really right for the part? How can you make sure the ‘actor’ you end up using is the best one for the role? Join New Jersey author, Jon Gibbs, for a fun, informative, workshop on auditioning potential characters. Also, there may be candy.

Please note: This is a hands-on session. Attendees should bring pens and plenty of paper to work with.

Can you tell your novel’s story in seven sentences? What about your characters? Can you tell their arc, and how the story has changed them, in seven sentences? Join New Jersey author, Jon Gibbs, to learn how applying the Seven-Sentence Solution to your story (and to the people who take part in it) can make writing your book a lot easier, and reading it a lot more fun. This is a two-hour session. Also, there may be candy.\

A writer of thrillers, fantasy, horror, etc. (most of it for Middle Grade), Jon’s middle-grade fantasy, Fur-Face (Echelon Press), was nominated for a Crystal Kite Award.

In addition to his Fun with Fiction School program, Jon is the founder of The New Jersey Authors’ Network (NJAN). He has appeared with fellow NJAN members at panel/Q&As in libraries around the Garden State. He has also given numerous solo presentations and workshops on writing and blogging, as well as the occasional after-dinner speech. Jon’s 60-minute presentation, GETTING PUBLISHED: 10 Things Every Writer Should Know was broadcast on local cable TV in the Fall of 2012.

Born in England, Jon moved to New Jersey with his wife and children in 2004. He became a US citizen in 2016.

When he’s not running around after his special-needs children, Jon can usually be found in his basement office, staring at the computer – one day he hopes to figure out how to switch it on.

To read more about Jon, visit:

Tammy Burke, past GLVWG conference chair and  president, has published over 400 articles in daily newspapers, newsletters and regional magazines. She is shopping her first YA fantasy manuscript, Hazel Lies, and is revising her second book. In addition to writing, she spearheads marketing for a fire and security systems company, raises a brilliant ADHD middle-grader, fences with rapier swords in  the Society of Creative Anachronism (SCA), and considers herself a student of the fantastic and mundane.

10 Great Reasons to Come to our Saturday Morning Meetings:

September’s speaker is author Chris Redding, who will present a morning session on “How to Make Money Before You Hit it Big”. Hope to see  you there.

Gisela grew up in Southern Germany before making the United States her permanent home. She studied at the University of Texas at Austin as well as the University of Minnesota at Minneapolis where she earned an M.S.W. Gisela lives in Bethlehem, PA, and teaches sociology at a local college. She loves writing, has contributed to GLVWG’s Anthology, and has finished her first novel. Her interests are many, including reading, acting, hiking, rowing, traveling, going to the movies, and trying out new recipes. 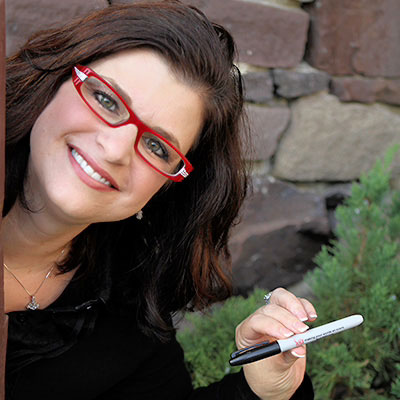 It is thrilling that you are joining us at this year’s GLVWG “Write Stuff” conference and what amazing information you will be bringing!

Suzy Kuhn: I feel very honored to have been asked to join the conference faculty this year. I’m a Pennsylvania girl, I always love “going home”.

I was hoping you wouldn’t mind giving us a teaser about the “Author Promotion Boot Camp” workshop you will be leading on Friday, April 8.

Suzy Kuhn: I am the originator of Author Boot Camp, which I began several years ago at a retail event. Because other Author Boot Camps have sprung up, I now call mine “SuzyQ Boot Camp”.

At GLVWG I will be covering the topic of engagement in these three areas: Author Etiquette, Social Media and Retail Relations. Because of my approach, SQBC is great for conferees who are just beginning to think about writing all the way up to NYT best selling authors. We will have plenty of time for Q&A along the way AND I plan to add a bonus segment on Branding.

END_OF_DOCUMENT_TOKEN_TO_BE_REPLACED

Hi Catherine! It is exciting that you will be with us this year for the conference.

I was wondering if you could give us a little teaser about what you will be covering during your Friday workshops, “Cause and Effect Sequences: Pace & Flow” and “Becoming a Storyteller, not just a Writer.” They both sound intriguing! Your Saturday sessions “View, Verbs, and Vividness—A Different Way to Look at Show-Don’t-Tell” and “Revision is a Process: Simplified” also sound extremely craft-worthy and informative as well.

Catherine E. McLean:  A little teaser for “Cause and Effect Sequences”? How about— what was meant wasn’t what was written?

Writers are warned not to do anything that takes a reader out of enjoying the story world. Putting the wrong sequence of actions down or leaving out a sequence of actions, reactions, or responses nets a very confused reader who stops reading.

Keep in mind that readers are not mind readers. They only have the words on a page to go by. Should the reader stop to reread, then guess what was meant, and discovers later they guessed incorrectly, well, the reader is miffed. If the writer does this enough times, the reader quits reading, never to buy from that author again.

END_OF_DOCUMENT_TOKEN_TO_BE_REPLACED

We are thrilled to welcome you to this year’s GLVWG’s “Write Stuff” conference which is in its 22nd year. Your expertise both internationally and domestically makes you such a wonderful addition to our conference faculty.

Alexander Slater: Thank you! It’s an honor to be here.

Alexander Slater: My favorite thing about being an agent is being blown away by outstanding fiction that millions of people deserve to read but haven’t yet. I truly can’t think of a least favorite thing.

How would you describe your ideal relationship between an author and yourself? What are your expectations? And what “sparks” you most when working on a project?

Alexander Slater: My ideal relationship would be one with an author who respects my time as much as I respect hers. I look for clients who are hardworking, creative, and willing to fight for their work as much as I am. I want authors who have something to say in a new and amazing away, writers who have faith, and writers who can teach me something I did not expect. What sparks me most is usually a story that insists I keep turning the pages, and language that makes my mind crackle. I am continually surprised by how many writers there are, so I’m looking for a partner who knows why her voice deserves to contribute.

END_OF_DOCUMENT_TOKEN_TO_BE_REPLACED

I am so glad that you will be joining us for our 22nd annual “Write Stuff” conference. Your background — as an international literary scout, managing author rights, previous author support, and now an agent — I’m sure has given you exceptional skills in knowing what’s a good fit in the publishing world in addition to having the expertise to help an author grow. Welcome!

So the first question I would like to ask is on your bio on Waxman Leavell Literary Agency’s website you say that you “look forward to creating partnerships that prioritize building identifiable author brands.” Could you share a tidbit on some branding ideas? Also, what would be your dream manuscript and how would you describe the ideal author?

Cassie Hanjian:  For author branding, the most important thing to think about is your audience. How does your audience see you, and how easily will your audience be able to identify you in the future? I don’t have any one “dream” manuscript — although I’m currently looking for historical fiction similar to Sarah’s Key set in a period before WWII. Outside of specific plot elements, I’m looking for a good handle on plot and pacing, writing that doesn’t need to be heavily edited, and a style that is accessible to even the casual reader. To me, the ideal author is one that is not only supremely talented; they also have to be open to constructive criticism, able and willing to do a lot of leg work to market and publicize their book, respectful, and professional.

Could you share any pet peeves or significant ‘no-no’s’ when it comes to sending out a query or giving a pitch? Does it make a difference if it is for fiction or nonfiction?

Cassie Hanjian:  For both fiction and nonfiction queries, writers should take care to proofread and pay special attention to the spelling of the agent’s name and the name of the agency. Spelling my name or that of my agency incorrectly signals either apathy or a lack of attention to detail — qualities I’m definitely not looking for in an aspiring author. I view the query letter as a representation of what I’ll find in the manuscript; if there are lots of spelling/grammar errors, or if the letter is unfocused, I can only assume I’ll find more of the same in the actual sample. It’s also important to remember to succinctly describe the central idea of the book in the pitch — I need to have a clear idea of what I’m going to read before I actually take the time to do so.