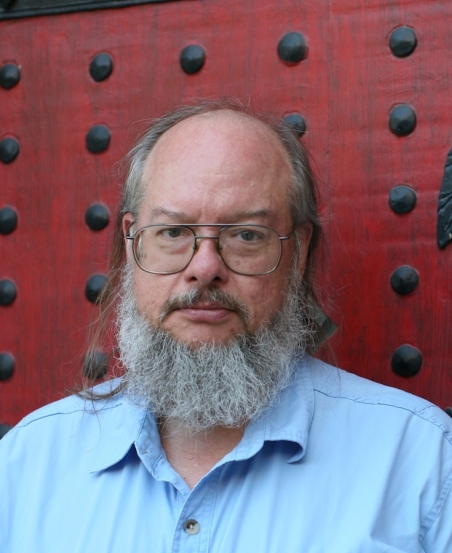 He will conduct a two half-day sessions on Thursday, March 12:

What to Put In & What to Take Out:

How to remove meaningless stuff from your prose, and put content back in.

Key rules, the genre differences, and how to think about the morass of conflicting advice

Then on Saturday, March 14, Tim will facilitate four sessions:

Getting Conflict on the Page

Don’t Be a Bobble Head

Timons Esaias lives in Pittsburgh, in the Squirrel Hill neighborhood, with his wife who is a physician. He writes satire, speculative fiction, poetry, and the occasional essay. His work has appeared in over a dozen different countries, and fifteen languages. He has been a finalist for the British Science Fiction Award (1998) and the Rhysling Award (5 nominations, Third Place 1997), and he won the Asimov’s Readers’ Award for Poetry (2005). He is a member of the Pittsburgh Poetry Exchange; a Member Demeritus of the Worldwrights; and a certified Rogue in Lair #1 of the Rascals, Rogues & Rapscallions.

An Interview with Tim Esaias

Question: What’s the most important lesson you’ve learned from rejections?

Tim: That rejection is networking, a truth which is very hard to keep in mind. Editors at major publishers (and agents, for that matter) are professional talent scouts. They pay attention, even when turning you down. (I once had a magazine and book editor — who had rejected me some 30 times — give me a complete rundown of my career, where I sold and why, off the top of his head.) You may not have sold this piece, but you may have paved the way for the future. Likewise I’ve had editors who rejected something, later send me a contract for the same piece, for an anthology, out of the blue. The other important lesson is to persist. As a rule, editors don’t buy what you haven’t submitted. Just keep rolling the dice.

As an example of the latter: My story (“Sadness”) that appeared in 3 Best-of-the-Year anthologies, well, it was rejected 20 times before it sold.

Q: Do you have a disciplined writing routine? If so, what does it include?

T: I choose to assert my privilege under the Fourth and Fifth Amendments of the Constitution of the United States.

Q: Share the strangest source of inspiration for your writing that you can remember.

T: It was an old black-and-white photograph, in a shoebox, of a very small child playing jack-in-the-box in a cardboard box that he could just fit in. The box was on a lawn, next to tropical or semi-tropical plants of some sort, and I decided to write an advertisement for a service that mailed your kids to an inexpensive country in Africa, and raised them cheaply, and the picture was of a happy child being delivered to boarding school. That led to a faux news satire column that was eventually syndicated to seven newspapers.

Q: Who is your favorite main character you’ve ever created and why?

T: It used to be Norbert, from my career breakout story “Norbert and the System,” but now I have to change that to the model TD8 PandaPillow®, serial #723756, from the story that came out in Asimov’s Science Fiction in the January/February 2020 issue. (Story is called “GO. NOW. FIX.”) Pandapillow was a stitch to create, because it really is a pillow (a pillow with some mobility features and limited AI), and trying to make a pillow into a protagonist is a real writer’s challenge.

Q: What advice can you give beginning authors in establishing their brand and media presence?

T: I choose to assert my privilege under the Fourth and Fifth Amendments of the Constitution of the United States.

Q: The age-old question for authors everywhere—>Why do you write?/Why writing?

T: I write, primarily, because it’s an excuse to think things through. I tend to set myself challenges with my writing projects, often involving arguing against my own beliefs and prejudices, or trying to see the world from a different, even alien, point of view.

Q:What projects are coming up next for you?

Answer: It’s whatever the courts tell me it’s going to be; er, that is, on the advice of counsel I choose to assert my privilege under the Fourth and Fifth Amendments of the Constitution of the United States. (There is a story about what becomes of all those discarded containers of Concord grape jelly, once they reach critical mass. It’s not going to be pretty.)

Q: What was your favorite or most memorable story you heard as a child?

T: What comes to mind is a group of stories. I lived in Pennsylvania as a child, and we toured French & Indian War sites, Revolutionary War sites (Valley Forge, Philadelphia), War of 1812 sites (brig USS Niagara, frigate USS Constitution on a trip to Boston), and Gettysburg from the Civil War. The tour guide stories about humans under great and murderous stress both troubled and fascinated me.

Q: If you could travel anywhere, where would you go?

T: Saturn, or, at least, the close vicinity of Saturn. If transport is unavailable, I’d settle for the Temple of Borobudur on Java. (I’ve already checked Troy, Delphi, Istanbul, Stonehenge and Iceland off the list.)

Q: If you could meet anyone, doesn’t have to be an author, living or dead, who would you like to meet and why?

T: I choose to assert my privilege under the Fourth and Fifth Amendments of the Constitution of the United States. Rumors of such a meeting are spurious, slanderous, and without merit.

What to Put In & What to Take Out:

How to remove meaningless stuff from your prose, and put content back in.

Develop an action plan for facing the rewrite of your novel, or any piece of prose fiction. We’ll start with all the Horrible Things you need to excise (Tim dishes out a full blast of anti-bobble-headism, along with attacks on saidisms, compulsive modifications, and references to the beheading of Charles I); and then we’ll move on to the important matter of adding significant details, POV signifiers, color characters, theme music and more. Tim will suggest a series of focused “preliminary passes” to make through the manuscript, each addressing a specific issue. There will be exercises; chocolate; and, of course, malt balls.

Style makes or breaks your chance of a sale, but what the heck is it? How can you make it your servant? Timons Esaias will shed a modicum of light on the dark mysteries of style. We’ll discuss the key rules, the genre differences, and how to think about the morass of conflicting advice you’ll encounter. Tim promises three specific style tools that should fit in any writer’s kit: the Churchillian Sword, the Vanilla Verb-Pair Demon, and Uranium Enrichment to Weapons-Grade Prose, with exercises for each tool. We’ll discuss the use of Templates, and engage in a Style Analysis exercise covering 7 genres. Bring questions about everything from spelling to musical rhythm. Suitable for all genres. Required text is Strunk & White, because love it or hate it, you should all have it.

Getting Conflict on the Page

The course of a Protagonist’s story never should run smooth. We’ll share ideas for putting speed bumps, puncture strips, hungry lions and venomous mothers-in-law between your character and their goal. Not content, we’ll get you doing it on every page, nay, every paragraph. Bring your stylus and clay tablets (or whatever writing tech you favor), and a few pages from the middle of your project.

This is a hands-on session. Bring your stylus and clay tablets (or whatever writing tech you favor), and a few pages from the middle of your project.

Don’t be a Bobble Head

Tim will inoculate you against the nods, smiles, POV expressions, clenched jaws, anachronisms, Vanilla Verb-Pairs and other “bobble-headisms” that can choke your prose to death, and poison your chances for a sale. He’ll also address the Moon Muddle and raise the Pack Animal Question. This talk will be the bane of your bad habits, and a guide for your good ones.

You already know how a story starts, you’ve seen hundreds of them. Still, it can be intimidating, so we’ll review four key methods. We’ll actually try them out on your current project, so you’ll leave with more possibilities than you can use.

Malt balls will play a significant role in the procedure.

One of the easiest paths to publication is poetry written for the genre magazines and markets. Those markets are also more likely to pay, more likely to accept humor, and (if you’re still a fan of rhyme) more open to rhyme and form. Did we mention that there’s also an eager, enthusiastic audience?

The range of topics is so wide, that Tim’s mantra is: You Can Try Anything In Genre Poetry. It’s a great playground. Come join the fun.

Tim has appeared in numerous science fiction magazines, most recently in the January/February 2020 issue of Asminov’s Science Fiction, with the short story, “Go. Now. Fix.” Tim was a featured author in the Lightspeed Science Fiction and Fantasy with his story, “The Mars Convention.”

Tim received high praise for his speculative poetry collection,  Why Elephants No Longer Communicate in Greek.

“Timons Esaias is a prankster, a comedian, and a magician. But his sleight of hand, misdirection, jokes, and science fiction metaphors – entertaining as they are – are only camouflage disguising his deadly seriousness. His poetry urges us to face the truth before the world ends, and his tone is one of profound disappointment that most of us are not much interested in this urgent mission: ‘Just lie, and stick to it,/and physics,/responsibility, even fact, can take no hold.’ Esaias’ poems are funny, profound, and necessary.”—Michael Simms, founder of Vox Populi and Autumn House Press.

“Timons Esaias is no stranger to the speculative poetry community having won the Asimov’s Readers Award (2005), been a finalist for the British Science Fiction Award, and having been nominated for the Rhysling Award five times.  His poem “Regarding the Mastodons” won the 2016 SFPA poetry contest Short Form category.”  “In Why Elephants…, Esaias has assembled a fine book of poems rich in mystery and dislocation, elements generally appreciated in speculative poetry.”  – Herb Kauderer, SFPA Reviews Page Winter 2016/2017

You Can Find GLVWG at
http://glvwg.org