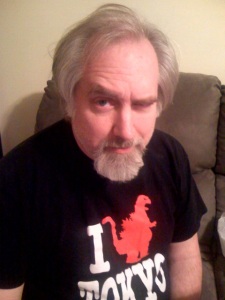 I’m fascinated by your study of the Japanese martial art, Kendo (Way of the Sword). Please tell us how you became involved with it and how far you have progressed. Have your experiences with sword fighting provided material or inspiration for any of your fiction?

White: I’ve been playing with swords since 1978. I started out by taking fencing as a PE class in college. I confused the heck out of my coach when I asked her if she had a left-handed foil. She found the left-handed gear and then watched me fumble with it for a bit. She then noted, “You’re not left-handed,” to which I admitted I was not. “Why do you want to fight left-handed?” I simply replied, “There are 33 of us in the class and everyone’s right-handed. This way, I get to practice against 32 right-handers and they only get to practice against me about once every four classes.” She nodded and said, “I’d like to talk to you about joining the fencing team after you finish this class.” *grin*

After that, I wound up joining up with the local Society for Creative Anachronism and kept it up after I joined the Army. I loved going to fighter practice, especially when I lived in Monterey, CA. It was great stress relief after spending a week beating my head against my desk trying to learn Arabic. I learned broadsword and shield, great sword, Florentine, and battle axe and shield (as a left-hander again). I learned quickly why people hate fighting lefties. If you’re fighting a right-hander against another right-hander and you miss a shot low, you get hit on the bottom. If you fight a lefty and he misses low on you, you get caught straight in the cup. A most unpleasant experience let me assure you. *grin*

I was never knighted or anything like that in the SCA, but I was a herald as well as an apprentice armorer when I wasn’t fighting. I’ve done field heraldry, court heraldry, as well as helping people design their coats of arms. Heraldry is a fascinating field and I loved doing all the research.

I also learned that armor is HEAVY. My suit was metal scales on a leather tunic that hung down to mid-thigh. That was over a padded suit. Then I wore 12-gauge steel arm and leg armor, I had a 10-gauge steel helmet and 14-gauge chain hanging from the helmet to protect my neck. (And, of course, I had a steel cup that fit over the regular baseball cup I used.) I think my armor clocked in somewhere around 50 pounds. Which doesn’t sound like much until you’re wearing it for a couple of hours out in the sun, but believe me, you’ll notice it after a while.

I wound up getting introduced to Kendo in 2001 thanks to a co-worker after I left the Army. I’ve been participating off and on since then and have reached the rank of nidan. I primarily fight ito (or one sword), but I have tried my hand at nito (two-swords). I’ve also been introduced to naginata (polearm) and I’ve watched but never tried kyudo (bow) or jo (staff).

My fighting experience definitely has helped my writing. I’ve been known to grab some of my friends and actually try out a maneuver to see if it’s physically possible or even feasible. I’ve also organized a couple of melees and then just watched and taken notes, which I think helps bring a more realistic feel to my fight scenes.

What inspired your short story series, For a Few Gold Pieces More? Is there a common theme that connects each of the stories? There are currently nine installments. Will there be a tenth?

White: For a Few Gold Pieces More started out as a single short story, mainly to prove to myself I could write one. The Demon’s Head was my first serious attempt at writing under 5,000 words and it was painful to try and keep the word count down. When I sent it to a friend for review, she offered to publish it through her small press . . . but could I expand it to a slightly longer story because she wanted a series of stories.

*note: Never give a writer an excuse to go long. It never ends well*

To put together the series, I decided on two things. Since I had not named the main character in the first story, I was never going to name him. In fact, nowhere in the ten stories, do I ever name nor describe the character. I got the idea after watching The Good, the Bad, and the Ugly and that’s how my “Rogue with No Name” was born. In fact, I have been known to put on some Clint Eastwood movies to try and get that sound in my head before writing specific scenes.

The second thing was, I wanted to explore folktales and myths, but I wanted to step away from the ones that have been done to death. So, Shades of Blue, my third story is a mash-up of Dracula and Bluebeard; Skin the Cat is the legend of Catskin (the creepy pervy version of Cinderella); Wings of Fire is the Firebird from Russia; and Pearls of Water is the Swan Princess, but a Chinese version of that legend. I hope to use this collection to get people to expand their knowledge of myth and folktales beyond Grimm and Andersen, (although they do have good stories too).

The last story wraps up the first arc of my protagonist’s life. Sword of Fate is another mash-up, linking a Scandinavian folktale and Yorba mythology. I got the idea for this story after reading My Life in the Bush of Ghosts by Amos Tutuola in my African Literature class. If you’re not familiar with this book, I highly recommend it. Why this hasn’t been turned into a fantasy horror movie yet, I do not understand.

I’m not sure if I’m going to continue doing more stories with this character, although I suspect I will. I’ve been writing his tales for nearly three years now. I think it’s time a few other characters got a chance to come out and play.

How did you become involved with Writer Beware and what is its mission?

White: Writer Beware® in a nutshell is the anti-scam committee for the Science Fiction and Fantasy Writers of America. We do a number of things to help authors, regardless of their experience or genre – we have a database where we keep track of complaints about publishers, we maintain a blog and a Facebook presence to help spread the word of “unusual” practices we observe, we are always willing to review a contract and compare it against other contracts we have on file to try and help spot “unusual” clauses, and things like this. We also go to conventions, writer’s workshops, and talk on college campuses with new and not-so-new writers who may have questions.

Writer Beware® is led by our chairman, Victoria Strauss, and Michael Capobianco and I are the other two team members. We’d love to add some SFWA members from the Midwest or West Coast to help expand our reach, but right now, we’re the team.

I had met Ann Crispin at several conventions and sat through her classes on how to write query letters. Then a few years after that, I ran into Victoria Strauss and Ann at an on-line writer’s forum called Absolute Write Water Cooler. I started out helping over there, checking up on odd claims by small publishers and using my analytic training to spot things that weren’t quite right.

I contacted Ann in 2007 to see if there was anything I could do officially to help out with Writer Beware and joined the team that summer. I’ve been doing a lot of roadwork for the team, going to conventions and doing talks about ways authors can derail their own careers because they get in too much of a hurry to get published. When people get that offer, sometimes the “Oh my gosh, this is it!” rush takes over and they don’t double and triple check things before signing on the dotted line. It never hurts to get a second opinion – especially before you submit, rather than afterward.

For the Write Stuff conference, can you please give us a summary of what you will cover in your Friday night “Writer Beware” session and in your Saturday presentation, “Craft of Writing Historical Fiction”?

White: For the Writer Beware session, I’ll be doing a slideshow presentation I call “How Not to Get Published”. We’ll discuss agents, publishers, and the business of writing as well as talking about self-publishing. If I can get one person to do their research before they send their manuscript into the cold dark night, then it’ll have been a useful session.

For the Historical Fiction talk, I’ll be talking about separating reality from fantasy (aka, don’t believe everything you see on TV). I’ll be promoting good places to do your research as well as sources that might need to be taken with a grain of salt. I’ll discuss my personal research techniques as well as soliciting questions from the audience so I can tailor the talk more to what they want to get from it. Their needs/desires might be quite different what I’m envisioning while I’m typing this, so I need to be flexible to give the audience something useful (and hopefully interesting).

What have you released recently and what publications are on the horizon?

White: I’ve been working on a number of projects. My last story for the collection, Sword of Fate, will be released in December 2014 by Musa Publishing. Also, I have several projects coming out from Pro Se Productions in 2015, to include Black Cat: Mouse Trap, a novella featuring the Golden-Age Black Cat from Harvey Comics, Strikeforce Falcon: Flashpoint, which is an action-adventure short story set in the Pacific theater of WWII, The Full Moon Affair and The Pearls of Darkness Affair, which are two fantasy noir novellas featuring my detective Theron Chase.

Also, I’m finishing up a short story for inclusion in the Origins Gaming Festival anthology. My story, A Gryphon’s Tale, was in the 2014 anthology, Monsters, and this year’s theme is Space. I’ve got an interesting take on a Jules Verne story and I hope the editor agrees with me. *grin*

Beyond that, I have several other projects that have been approved, but the publishers haven’t cleared them for promotion quite yet and, of course, I have other stories and novels I’m working on that I hope to find homes for in the near future.

Also, I am collecting up my old world-building column Terra Incognito that I did for Penumbra magazine and will be releasing it as a non-fiction book in 2015. I’ve got a friend who’s an editor who’ll be helping me smooth out some of the transitions – what works in a magazine doesn’t quite work as a book sometimes – and then we’ll be releasing it under my old company banner, Nightwolf Graphics.